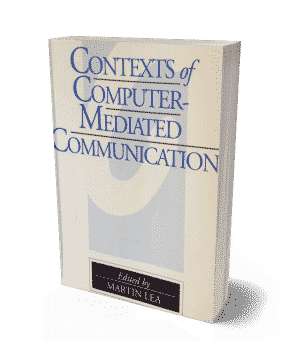 In 1992, three years after the commercial restrictions were lifted on what then became the Internet, and just a year after the development of the World Wide Web, I published the book Contexts of Computer-Mediated Communication, which introduced a new approach, based on the concept of social identity, to studying people's online communication, relationships and behaviour in interpersonal, group and organizational contexts. The book challenged the orthodoxy of opinion regarding the new forms of communication that had emerged, and since publication has been cited in over two thousand articles and books.   I have also contributed to more than 20 other books in the field. You can read and download my contributions to some of these titles below.

Social Psychology of the Internet

Constructing the networked organization: Content and context in the development of electronic communications.

How social is Internet communication? A reappraisal of bandwidth and anonymity effects

Social identity, group norms, and deindividuation: Lessons from computer-mediated communication for social influence in the group

When are net effects gross products? The power of influence and the influence of power in computer-mediated communication

Power and gender in computer-mediated communication: A SIDE look

Social processes in electronic teamwork: The central issue of identity.

A SIDE view of social influence

Representations of the group and group processes in CSCW research: A case of premature closure?

Breakdown of personal relationships and the threat to personal identity