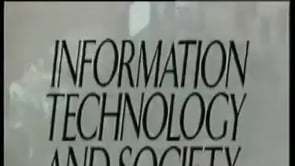 The BBC filmed a simulation of our early experiment (Lea & Spears, 1991) into group computer-mediated communication for a programme called "Computers in Conversation" which was first broadcast on BBC2 in 1995. The programme, which discussed the emerging potential of a relatively cueless text-based computer medium for social interaction and group collaboration, was part of an Open University series on Information Technology and Society. Although the study was conducted nearly three decades ... END_OF_DOCUMENT_TOKEN_TO_BE_REPLACED