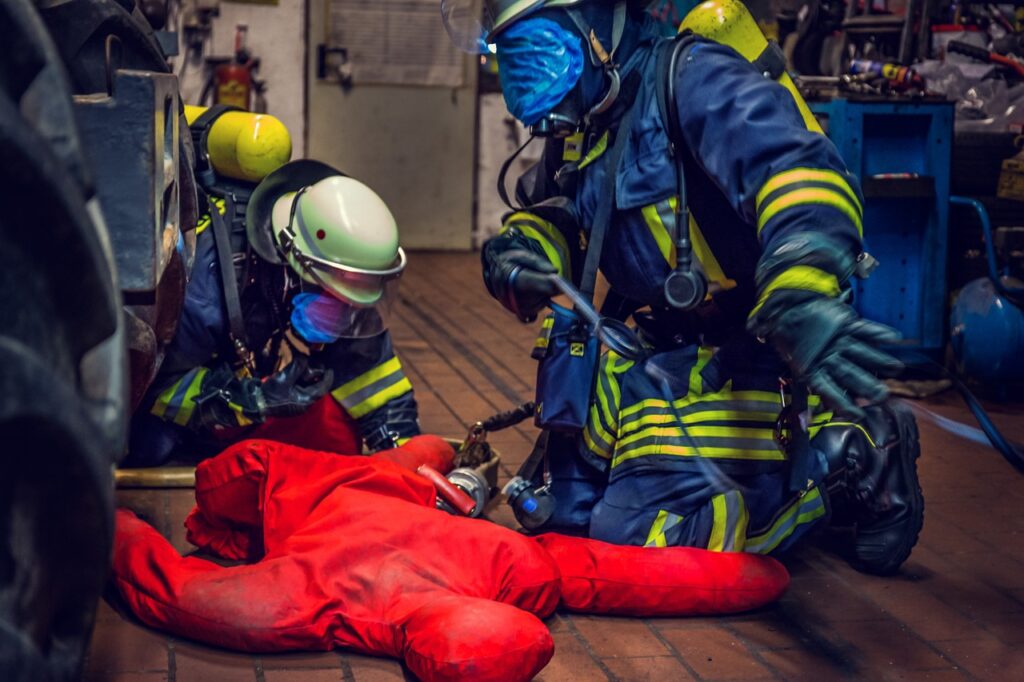 Emergency services responding to CBRN-type incidents require personal protective clothing, or hazmat suits, and equipment including personal breathing apparatus to shield against harmful agents. However, cumbersome protective suits, gas masks, rubber gloves, and protective over-boots of the sort worn by emergency responders to protect against chemical and biological attack can interfere with individual and group performance in a number of ways leading to as much as 30% decrements in performance in simulated activities (Krueger, 2001). In addition a number of acute psychophysiological effects have been documented, such as “gas mask phobia” (Ritchie, 2001).

This article is an extract from my 82-page report "Psychological and Behavioural Responses to CBRN Disasters: Implications for emergency response, community, and business continuity" Get the full report...

Communication with colleagues is reduced in both quantity and quality. Verbal communication can be restricted and more difficult to understand, and experience of these difficulties, coupled with subjective feelings of enclosure, separation and isolation produced by the clothing, may cause individuals to further reduce their attempts to communicate.

Good human communication depends upon redundancy of information to be effective. Thus, in addition to what is said, paralinguistic cues, such as tone of voice, and a range of non-verbal cues, such as facial expressions and gestures, are essential aspects that increase successful communication and understanding.

Protective suits, helmets and breathing apparatus can severely impede communication of these cues, by restricting the physical movement, sound and vision of both senders and receivers. A further communication problem is created by the reduction in personal identifiability from donning a protective suit, meaning that names, ranks, and organizational memberships are less easily recognized.

In addition to the diminution of information exchange, communication and understanding, protective clothing and breathing apparatus in particular can cause a range of psycho-physiological effects, such as overheating, sweating, and respiratory difficulty, escalating into hyperventilation and acute psychological reactions such as anxiety, claustrophobia and panic (Alexander & Klein, 2003; Barach, Rivkind, Israeli, Berdugo, & Richter, 1998; Krueger, 2001; Ritchie, 2001).

These psychological overreactions, or “gas mask phobia” appear to be well-documented, although estimates of their occurrence were unavailable. However, these effects are likely to be experienced more frequently by civilian emergency response personnel and others who have received little training or prior experience of emergency response wearing protective clothing (Dunbar, ???; Krueger, 2001).

Finally, it must be recognized that the public appearance of emergency responders in full CBRN-type protective clothing is likely to increase the anxiety of members of the public (Alexander & Klein, 2003).