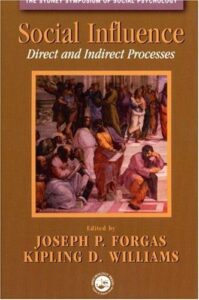 Researchers from the field of intergroup relations, and notably self-categorization theorists, have investigated how our group memberships impinge on the social influence process. Much progress has been made in showing how ingroup and outgroup information is processed differently and can have different impacts. Within this tradition, the way in which we categorize the source is more than an input, but may actually change the way we see the same message, and even whether we process it systematically, if at all (e.g., Mackie, Worth, & Asuncion, 1990; Turner, 1982, 1991). In this sense, self-categorization theory (SCT) moves beyond earlier group-based explanations of social influence in offering an approach that also focuses on processes of cognitive elaboration of information. However, once again there has been minimal emphasis on the effects of context, in the sense of the social setting in which source and recipient are embedded, on the process of influence.

One of the aims of the present contribution is to build on self-categorization theory, and to show that the group relation between source and receiver is indeed critical to social influence (the “direct” path, so to speak). The second major aim is to show how this process can also be critically moderated by the social context (an “indirect” influence). The influence of context is indirect because, as we have defined it above, it is often incidental or irrelevant to the message, and even the relation between group and individual (see also Knowles; Ng, this volume). To make this case we present data from a program of research using the “SIDE” model: The social identity model of deindividuation effects. We elaborate this model further below. However because it develops the self-categorization theory of social influence, and examines how features of the context may affect the influence process we begin by briefly outlining the self-categorization theory of social influence.