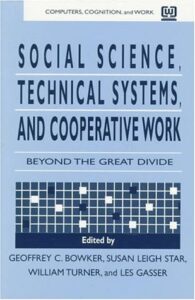 This paper considers the extent to which the representation of the ‘group’ and ‘group processes’ in the design of CSCW and groupware[1] systems reflects some of the wider preoccupations of the computing and telecommunications communities. This is part of our larger concern, which is that activity modelers tend to represent human activities in ways that are most appropriate to the tools and techniques they have at hand. This implies that their modelling activities go beyond viewing human activities as a set of constrained rational choices or governed by formalizable rules, (which is problematic in itself), but that the resulting models of activities have embedded within them elements of the technologies that were used in creating them. The choice and deployment of technologies in defining and modelling groups and group behavior manifest themselves in the resulting CSCW technologies.

Further, we suggest that rather than there being a ‘great divide’ between computer scientists and social scientists, the representations of the group in CSCW system designs and evaluations suggest a degree of closure or agreement. This closure, in itself, does not guarantee that resulting systems will be successful, but may help to explain why certain forms of groupware rather than others tend to dominate the CSCW field.

Our argument is that certain longstanding technical issues that have confronted the software and telecommunications engineering communities suggest frameworks from which to model the social world, and that concern over these issues has restricted the concept of ‘the group’ to a particular type (i.e., small, task-oriented, face-to-face groups), and has consequently has shaped analyses of group processes in essentially individualistic (i.e., reductionist) terms. We shall briefly focus on two examples of influences that have helped to shape this configuration of the group, and in addition, we will be suggesting how the predominant approach to conceptualizing groups in the social sciences (i.e., through small group dynamics) has reinforced this restricted view of the group in CSCW design as both natural and inevitable.

The first illustration considers the object-oriented analysis and design paradigm, and some of the implications of this approach for the representation of the group in system design. Because this work has only just begun, we will only be sketching out one of the areas for consideration, in this case, the concern in object-oriented design over the visibility of objects and their interrelationships in the ‘real world’ and their visual representation on the screen. Other important features of the object-oriented approach to groupware design, such as the classification of objects, the hiding of data, and the re-usability of code, will be left for exploration elsewhere. Our aim is to demonstrate that certain technical manifestations of the object-oriented paradigm help to define both the group and group interaction within CSCW.

The second illustration focuses on the issue of communication bandwidth. Again, we will attempt to trace here in only the briefest way how the problem of bandwidth limitations in communications came to be so powerfully influential in the analysis of mediated human communication. Essentially our argument is that the consensus between both the telecommunications engineering and social science communities over the utility of the ‘bandwidth’ concept for modelling communication, has been concretized in the design and evaluation of the new telecommunications media.

The overall aim of this paper, then, is to illuminate some of the ways in which the stabilization of restricted notions about the group and group processes in groupware design has been achieved through consensus between the various relevant parties. We begin, however, by first identifying the predominant view of the group in groupware design and highlighting some of its restrictions.