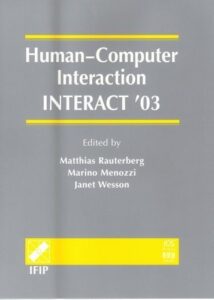 For millions of people, text-based computer-mediated communication (CMC) is a convenient and engaging way to exchange information and opinion. Research shows that the social ambiguity of text-based CMC, such as email, can both promote participation and group cohesion and lead to misunderstanding, offence and social division. We report a field experiment that attempted to expose some underlying factors. GNU Mailman was configured to promote either individual or group perspectives during email discussions. It was used for political debate by two groups of Indonesian NGO members during the Indonesian constitutional crisis of 2001. We assessed changes in their perceptions of their groups and their political attitudes. Our findings suggest that CMC for socially loaded topics relies upon two complementary factors: the ability of the medium to underwrite participants Social Identity and its support for expression of the group’s conversational aims.
Download Chapter

Indonesia is a vast archipelago. Many of its islands are difficult to reach and suffer from poor infrastructure. For many Indonesians, email has been something of a revelation in terms of connection to the outside world and communicating within Indonesia.

In recent years, email has received scant attention in HCI and CSCW, eclipsed by “rich media”, such as videoconferencing or collaborative virtual environments. Yet the simplicity of email and its modest technological requirements have thrust it into a very contemporary role as a major coordination tool for underdeveloped regions and nations. Email is a tried-and-trusted technology, used daily by millions of people as an easy way to overcome the barriers of time and space. It is easily the most successful kind of groupware application and its popularity shows no sign of abating.

However, the role of email in bringing people together is potentially confounded by its ability to convey social information. As the messages people exchange become more socially loaded, so much more complex are the social problems posed by the use of this medium. It supports more than work-focused communication in the workplace; it is used to support an extended social network within and beyond (Preece, 2000).

We wish to expose some of the factors that govern the effectiveness of lean media in supporting socially loaded communication.

If you find this article interesting, please tweet it so that others can find it.

Email cannot simply be viewed as a substitute for physical contact. All CMC technologies bring changes to the way people interact with one another – email is no exception. These differences are most evident in those CMC technologies that omit non-verbal information, such as gesture, facial expression or intonation in speech.

Non-verbal cues can serve a number of purposes, including identifying objects and membership of a communicating group, regulating turn-taking or indicating emotional state. Consequently, the inclusiveness, reference, fluidity and semantics of conversation are all impacted by the absence of non-verbal information (Finn et al., 1997; Monk & Watts, 2000). Whereas video-based CMC systems can preserve non-verbal richness in each of these respects, the relatively impoverished nature of text-based CMC sets it apart from ordinary conversation. Indeed, it can have dramatic effects on the way people communicate with one another (Dubrovsky et al., 1991).

Lack of social information, or “social cuelessness” seems to relax normal constraints on behaviour, potentially promoting a less inhibited, more democratic exchange of views. If this potential is to be harnessed to good effect, a design-relevant theoretical account needs to be developed. Most of the work that has looked at social cuelessness has focused on a generalized idea of anonymity within CMC systems (Baltes et al., 2002). Anonymity is typically achieved by using CMC systems that do not identify senders to receivers, and vice versa. In a recent meta-analysis, Baltes et al. argues that email is never a better alternative than a real meeting unless some level of anonymity is involved (Baltes et al., 2002). However, they find no consistent evidence to support the idea that anonymity always exerts a positive influence. This suggests that anonymity is of potential benefit for group communication. It also suggests, however, that misidentifying the components of anonymisation or contexts within which it is interpreted, are likely to be damaging.

Interpersonal communication is about building understanding. Many theoretical approaches have been proposed to account for communication, each intended to address some aspect of this process. This makes it impossible to choose “the best theory” for the design of effective communication systems or anything else; as Littlejohn notes, communication is more than one activity (Littlejohn, 2002). We draw upon two theories for insights into the design and experience of using communication and collaborative systems. We do so on the grounds that they have already proven useful in studies of CMC. These are Social Identity Theory and Common Ground (Spears et al., 2000; Watts & Monk, 1998).

Social Identity Theory attempts to explain how a person’s attitudes and behaviour are affected by their membership of social groups (Tajfel & Turner, 1986). It claims that everybody has to manage several identities. Social Identity refers to the part of an individual’s self-concept that comes from membership of a particular group. Membership of different groups implies a shifting balance between the elements of how one views oneself, depending on the social conditions that prevail at any time. Whenever the salience of a particular Social Identity is high, one typically experiences an increased sense of identification with the group concerned. This means a closer adherence to an internalized norm for this group, especially for “inter-group contexts on which a power relation is present between groups” (Spears et al., 2000). Unfortunately, in negotiations between groups, progress can be difficult or impossible to achieve without compromise. Precisely this kind of flexibility and openness to other ideas is put under threat by a high salience of the competing Social Identities of those individuals who take part in the discussion.

According to Clark, communication between individuals relies upon mutual knowledge and common aims. Mutual knowledge is established and then maintained by interlocutors through a process of offering, assessing and responding to information.
When a speaker believes that an interlocutor’s response is incompatible with their original statement, the speaker attempts to redress the listener’s gap of comprehension by ‘repair’. The purpose for which people communicate is not clearly known in advance but negotiated through the exchange of utterances. People reach a level of agreement about the purpose, or purposes, of their discussion and work together to pursue them as a ‘joint project’ (Clark, 1996).

We wanted to unravel the effect of anonymization based on insights from Common Ground and Social Identity Theory. We examined discussions among activists from several Indonesian non-governmental organisations (NGOs). This inter-organizational and interpersonal setting meant that the discussions were psychologically real for the participants and built directly upon their existing Social Identities.

4.1 Social and technical context of study

After months of political unrest, the Indonesian President, Suharto, dissolved parliament on 23rd of July 2001, sparking widespread public disorder and violent demonstrations. This act was a watershed in Indonesian politics and followed on from several years of active debate within the Indonesian populace about the direction of their country’s political system. As well as official political parties, Indonesian political processes involve many NGOs, bodies that are dedicated to raising awareness and lobbying for specific policy changes. The dissolution of parliament took place exactly one week before this study was due to begin and after volunteers had been recruited. Email is the most accessible asynchronous technology for remotely distributed groups in Indonesia. High-speed Internet connections are rare and, when available, unaffordable for most people. For our NGO users, internet connections are typically encrypted and run over conventional copper phone lines at between 9.6 and 14.4 kBps. Even the least graphics intensive web-based CMC tools are too slow to be a realistic proposition at such data rates.

In order to make any statements about the “democracy” of a discussion group, it is necessary to describe how the term is being used here. Rather than couching the
use of the term within a broader political context, it refers to equality of access, ability to overcome social barriers and openness to the consideration of alternative positions (Mantovani, 1994). Access and openness here are limited to the immediate members of the group. The mechanism of influence is in terms of making a contribution, i.e. sending a message. It is also necessary to consider that which is being influenced: in this case, it is a set of political opinions about matters discussed by the group. We also take the view that a corollary of effective democracy within discussion groups is that members begin to recognize themselves as social groups.

Our contention is that lean CMC systems are capable of supporting social relations and understanding within and between social groups in the same way as social relations and understanding are normally supported. In other words, the relevant psychological mechanisms remain intact, albeit having to deal with differing qualities and quantities of information. If a superordinate Social Identity can be established for people who come together from several independent social groups, they are in a good position to constitute Social Identity for this new group. If at the same time their individual identities are hidden, the participants’ focus will be more influenced by their collective identity. Simultaneously, if framing statements accompany discussion, the participants’ ability to build a joint conversational project will be enhanced. Our second research question was: “if a discussion group is cued to its social and conversational aims, whilst cues for individual identity are reduced, is the result a greater sense of belonging to the discussion group?” An adjunct to this question concerns the participants’ degree of social identification with groups outside of the discussion group. “Do participants in groups cued to social and conversational aims experience more dissociation with external groups than participants in a group without such cues?”

It is not true that all discussions are the same. Some have little in the way of emotional overtone, such as asking about the colour of someone’s bicycle, or for the time of day. Whenever people discuss matters in which they feel a personal involvement, the critical outcomes concern the exchange of opinions and the formation or stability of attitudes. The influence of CMC technologies is far greater for attitude-based discussion, where conversations are characterized by “interpersonal or interparty factors” (Short et al., 1976). To assess the effectiveness of a CMC system intended for such usage, we need to gauge changes in participants’ attitudes. Our third research question was thus: “if people converse with others, whilst being cued to the purpose and Social Identity of the discussion group, do their opinions show more evidence of change?”
Download Full Chapter