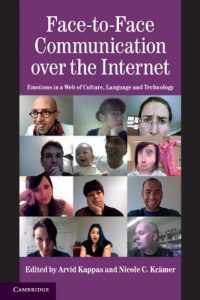 How does video mediation influence communication of affective information? In the present chapter, we review the range of possible constraints associated with the video medium and consider their potential impact on transmission and co-ordination of emotions. In particular, we focus on the effects of transmission delays on interpersonal attunement.

Results of a preliminary investigation of this issue are described. In the study, pairs of participants discussed liked and disliked celebrities via a desktop video-conferencing system. In one condition, the system was set up in its normal mode producing a transmission delay of approximately 200 ms. (high-delay). In the other condition, transmission was close to instantaneous (low-delay). Dependent measures included evaluative ratings of the celebrities and of the other party in the conversation and video-cued momentary codings of the interaction.

Participants rated the extent of communication difficulties as greater in the normal than in the low-delay condition, but did not specifically focus on delay itself as the source of the problem. Low-delay pairs also showed greater accuracy and lower bias in their momentary ratings of attunement and involvement over the course of the conversation. Finally, there was greater convergence of affect when participants discussed mutually disliked celebrities, but greater divergence of affect when they were talking about celebrities liked by one party to the conversation, but disliked by the other.

However, in another study in which interactants were friends rather than strangers, greater delay tended to result in amusement rather than lack of rapport, perhaps because of the attempted implementations of interaction repair strategies. The chapter concludes by arguing that emotional consequences of using video-mediated communication merit further research attention in order to complement the predominantly cognitive and performance-based focus of most previous studies of video conferencing.