The unmediated model is represented by the direct effect of x on y, quantified as c.

However, the effect of X on Y may be mediated by a process, or mediating variable M. 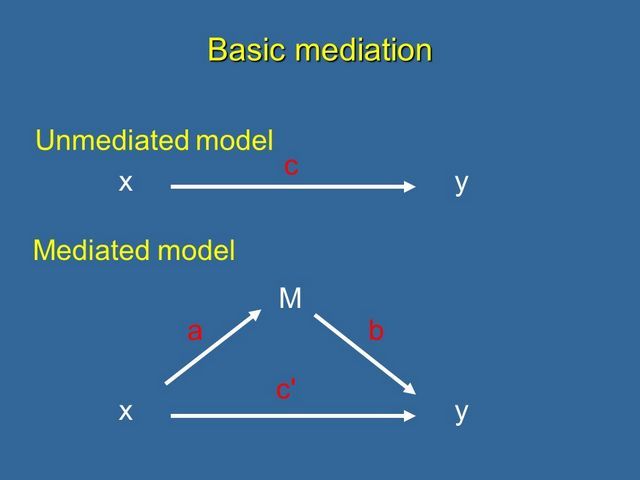 Complete mediation is said to occur when X no longer affects Y after M has been controlled for. In this case path c’ is zero.

Partial mediation is the case in which the path from X to Y is reduced in absolute size but is still different from zero when the mediator is controlled for.

Example: Effects of visual anonymity on attraction to the group

Here’s an example of a simple mediation analysis relating to my own research.

In this example I test some ideas about deindividuation theory that derive from a social identity approach to group behaviour.

My basic hypothesis was that visual anonymity among group members increases attraction to the group. 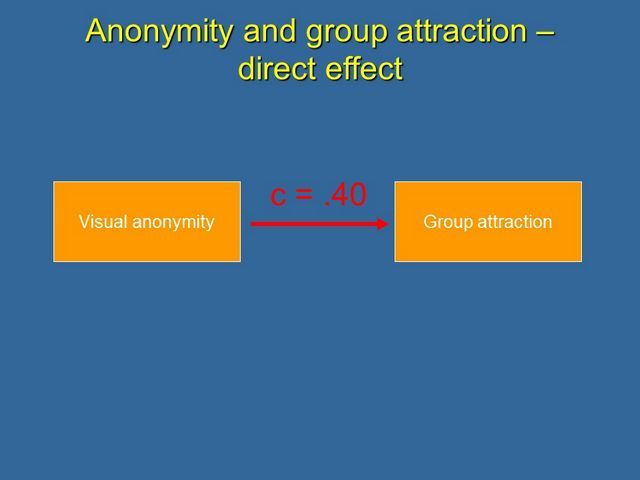 However, I also hypothesized that this effect was mediated by the extent to which group members perceived or categorized themselves as part of the group – a self-categorization variable. I next test this mediated effect and measure the change in the direct effect, with the following results….

Note that self-categorization is considered here to be a mediator, not a moderator. That is, my model was not that visual anonymity increases group attraction when group members self-categorize as part of the group.

Instead, my model was that anonymity increases group attraction because it increased self-categorization.

NEXT: 6. Mediation Analysis: Procedures and Tests